Going Live as Torture Corpse together with the awesome Norwegian band MOE. 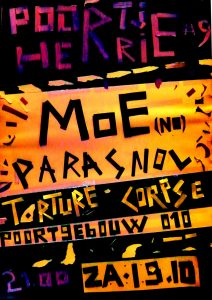 MoE (no)
Norwegian rock band. Powerful and angular, surprising and musical confronting.Through collaborations with artists such as Pain Jerk, Keiji Haino, Mette Rasmussen and Lasse Marhaug, MoE has become one of the most adventurous and productive bands in Norway. The music spans from heavy drone, chaotic noise, to up tempo punk with a mix of no wave and progressive elements. MoE is a must see live act, mixing elements of performance and improvisation with their eclectic rock sound.
https://moepages.bandcamp.com/album/la-bufa
Torture Corpse (nl)
Noise and dark ambient from the Netherlands
https://www.youtube.com/watch?v=oNadcRNOHHg&t=82s